Our Cloud is Nicer than Yours!

As a supplier of modern software solutions for drilling and well in the oil industry, we often struggle to communicate the difference between good and bad solutions to the challenges related to digitization in the oil industry. There are many reasons for this. Software customers often don’t ask providers critical questions about what they actually deliver. Providers often lack the expertise to answer the hard questions--or have no interest in explaining precisely what they mean.

Next up are providers offering systems that have been somewhat “modernized” but are not truly modern. Most of the existing systems in the oil industry are quite old, having been originally developed as solitary applications running on Windows-based computers with local file-based storage. Some of these systems have since been modernized to share data with the outside world. But “the outside world” here is actually limited to just other computers in the same company! These “modernized” systems can share files with servers in the same local area network and often can store their data in databases, themselves either live locally on the computer (MS SQL Express, etc.), or on database servers in the same local area network.

These systems do make data sharing possible to a slightly greater extent than before. However, all the applications are still required to be installed (and supported) on the computers to be used, and any data sharing beyond local area networks demands additional effort (WAN type solutions, VPN, corporate remote access/tunnels, etc.). This type of sharing is so difficult to manage that it’s rarely possible whatsoever to provide access to people who do not work directly in the organization.

These “modernized” systems are still functionally "single-user systems", where users work separately and individually as always. Data sharing has been somewhat streamlined, but the systems do not offer any "business layer" where a computer can ask the system to do anything; all "production" within a program requires a human being who does the job. 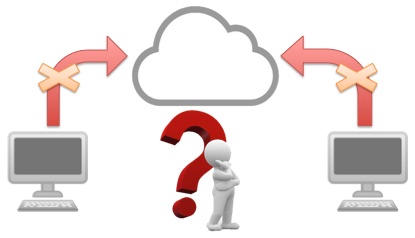 Such programs need regular maintenance and operation. PCs, Windows, and applications need continuous updates and need to be re-installed regularly. Everything must be backed up. The maintenance requires some form of IT Operations department (either internal or external). The applications primarily have a graphical user interface and require a human who puts data into the systems and pulls it out. Some of these systems do claim to offer APIs for data sharing – but here it is important to get into exactly what “API” means.

Most Windows applications have some type of API, but the use of these APIs requires that all applications are installed and running on the same physical computer. At best, these APIs are available on a local network, not "outside" or over internet. These are closed local APIs. Over the past decade, several of the major software providers in the oil industry have tried to build closed ecosystems using such APIs. They require customers to have already purchased and installed the applications they want to integrate, and the applications only live on local PCs.

These kind of APIs are not what the IT industry means when it speaks of “open cloud-based APIs”. For customers, it is essential that they understand the difference between whether a system is "cloud-based" only internally within the company, or whether access can be easily delegated to companies/people outside their own local area network.

Our view is that systems that require local installation of software, and that only share data via database or at best local area network, should not be called cloud-based solutions. To us, cloud-based solutions are those that actually live in the cloud, so that the provider can grant easy access to anyone at any time without requiring the customer install special software on its local premises. 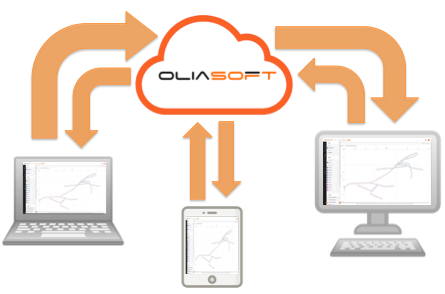 True cloud-based solutions always offer a machine-based interface (machine to machine). The graphical user interface (GUI) is an add-on typically built on top of the machine-based interface. The standard for open cloud-based interfaces has gradually become what are called REST-based APIs, typically based on either XML or JSON. XML/JSON are text-based ways to send data between systems that we humans can also read relatively easily (up to a certain amount at least). The open APIs offered by modern cloud solutions are thus often called "JSON-based REST APIs".

Most modern cloud solutions also offer GUIs running in browsers, allowing any device to be used to access the solution. Thus, it does not matter if a user is running Windows, macOS, or Linux, or even using a tablet or mobile device, as long as they have a web browser.

Some of the suppliers in the industry offer a combination of systems, some very old and others more modern. These will typically claim that they offer "open JSON-based REST APIs". This is in our experience only true to a limited extent. Typically what it means is that they have built a new platform that can provide access to data that their own older systems have already produced. This only enables a very limited form of automation. The new "open" solutions are typically offered only as additional products. We typically call these "advanced viewers" who can retrieve/view data from other systems from the same provider. This is undoubtedly useful for some type of use cases. But it also doesn't change the fact that many of the core systems — the ones that produce data INTO the cloud — are still only old Windows applications. If you don't have the old systems, you also can't produce the type of data you want to access.

In Norway, we are seeing more and more customers demanding digitization and cloud solutions. Equipment suppliers have been forced to open up the data streams from the sensors that the equipment generates. The traditional software providers have been asked to open their own interfaces and data storage, so that other providers can also provide value-added services based on open data.

But, although we are seeing some moves in the right direction, we are also seeing that the traditional suppliers insist on safeguarding their traditional products and data silos. Thus, the source of important data and processes still lives only locked inside systems that are inaccessible to the outside world. Customers who want to move towards digitization have becoming increasingly aware of these lock-in effects, as well as the limitations it places in relation to the additional degrees of automation and efficiency that digitization and cloud solutions could provide.

Oliasoft provides true cloud solutions with JSON-based REST APIs, which allows everyone to chat with our systems. We also offer graphical user interfaces that use the same APIs. In practice, this means that our systems can be operated in whole or in part by other systems or people in any desired combination. In theory, other companies can create user interfaces that will be able to compete with our own. In practice, most of our customers will create their own specialized interfaces with a high degree of automation.

Because Oliasoft is a young company, we have been fortunate that the technologies we have built the products on today are standard and "best of breed" in modern software solutions. Modern cloud and browser-based solutions have vastly better performance in many areas than the classic Windows applications from the 90s and 2000s. Our solutions benefit from technology from companies such as Google (Google Cloud, Chrome, V8/Node.js); Microsoft (Azure, Edge); and Facebook (React, Redux); as well as technologies such as Javascript, WebGL/Three.js, D3.js/Canvas, SPA/PWA and much more.

If you want to read up on the history of digital enablement, check out our article about Data Liberation.

Our ongoing mission is to modernize software in the oil industry, and we are always looking for smart developers who can help us make great products. If you would you like to join one of Norway's most innovative tech teams and be part of a company that takes good care of its employees, follow the link above.

Marius co-founded Oliasoft with a background as a software engineer and entrepreneur in industries including gaming, banking, venture, trading, and edtech. He is a former co-founder of Funcom (1993), Secana/Paynet, Snap TV and Kahoot, and has worked in finance (NBIM, Teknoinvest, Proventure).